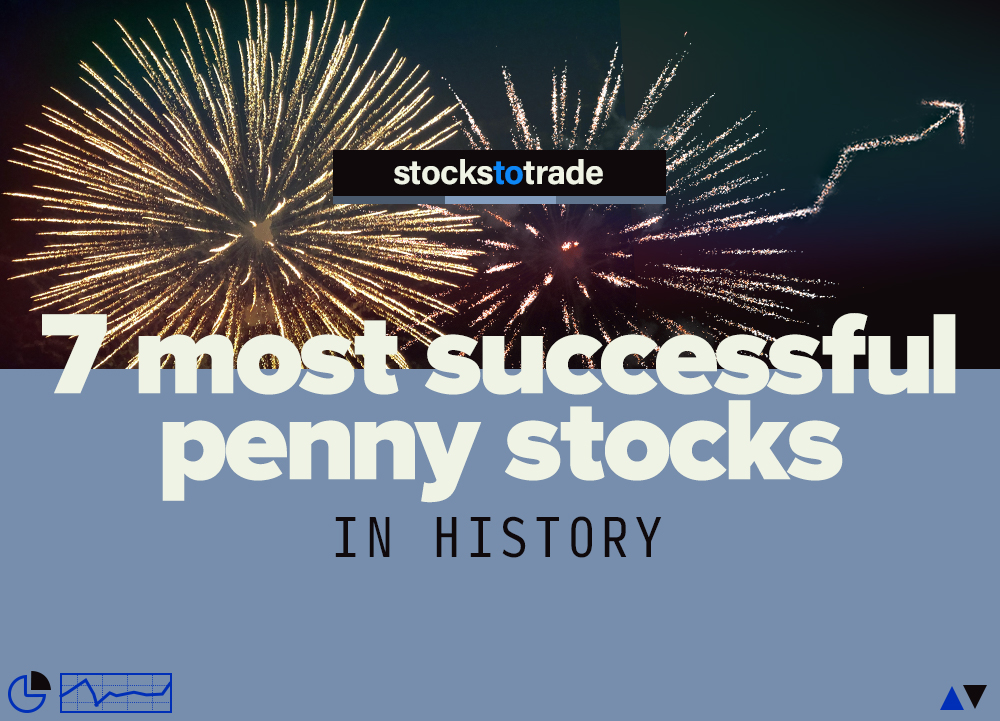 If you’re looking for the most successful penny stocks in history, make sure it’s for the right reasons.

There’s value in learning about these stocks. Real catalysts built them into what they’ve become today…

But if you start kicking yourself for missing out, take a break. That’s nothing more than FOMO.

There were signs of these stocks’ potential. Let’s look at these recent best-case scenarios, and talk about how they got where they are now.

Penny Stocks That Went Big in 2021

We’re not looking at how much you could have made if you bought at their lows and sold at their highs. That’s not repeatable. It’s a FOMO-inducing pipe dream.

What we’re looking at here are their charts. These charts show the big run-ups and spectacular crashes that are possible in penny stock land…

You can learn about chart patterns here.

Understand the patterns that have played out well in these stocks. Then, the next time a big gainer comes your way, you’ll be better prepared to come up with a plan.

Let’s look at some charts!

Retail traders figured out there’s strength in numbers … They applied this strength and squeezed GME into the $400s!

Volume is always a good thing in penny stocks. With retail traders working together, we’ve seen a lot more of it.

February 2021 was good to many stocks…

Penny stocks in a meme-friendly sector like weed stocks had better odds than most.

SNDL established a resistance level of around $1.25 in January.

It broke out on massive volume in February. It almost hit $4 before falling back to earth.

I talk about paying attention to hot sectors. This shipping company stock’s early 2021 breakout is a great example of this.

Castor made two big deals at a time when the global supply chain was in the news. They didn’t add long-term value…

But they showed how news can help a stock run!

The Reddit crowd gave AMC a jolt in February 2021, but it didn’t quite break out…

Why? AMC kept issuing new shares, adding to their float.

This helped the movie theater company stave off bankruptcy. When May rolled around, AMC began its climb to all-time highs.

AMC kept issuing new shares throughout this rally. The enthusiasm petered out after a June high of $72.

But nobody knows when or if it’s going to happen.

Every once in a while, a lowly penny stock turns into a billion-dollar company. But it’s rare. The best thing we can do after the fact is study how it happened.

Like Pinochio, this sketchy jeans company stock turned into a real stock! Private equity firm TowerBrook Capital Partners acquired it for $32 a share in 2013.

Its exponential growth eventually petered out. The company has declared bankruptcy twice in the years since.

Few stocks have had tremendous highs like Pier 1 — then managed to reverse their fortunes!

Pier 1 was a retail chain specializing in home furnishings. In February 2020, it declared bankruptcy.

The stock went through two amazing growth spurts in the past 20 years. Each time, it broke past all-time highs in the $500s…

Even more amazing? It fell back into penny stock range between these peaks!

If every trader had a trading room like this, Monster would be worth more than it already is!

Now it’s buying into the alcoholic beverage market. It could have even more room to grow.

Last year? It hit $336 before losing almost half its value…

It’s a nutrition and weight-loss company. These are always hot sectors, but especially in the stay-at-home age.

Ford has long been considered a blue-chip stock…

But the market hasn’t always been kind to legacy automakers like Ford. Just two years ago, the stock dipped into penny stock territory.

We’ve all clicked on the link that tells us what $1,000 invested at Apple’s IPO would be worth now.

But Apple wasn’t a penny stock in 1980. It just looks that way after adjusting for stock splits and dividends.

Amazon is another all-time regret for many traders.

Even so, the stay-at-home sector’s recent run presented an opportunity. Amazon has run off 100% gains within the past two years!

Remember — we’re only watching these stocks.

The way we spot stocks with the potential to grow is by understanding what they’ve already done.

Gamblers make bets on the next stock to run. Traders do research and build a plan.

Predicting a stock’s future is hard…

When we think in hot sectors, it gets easier.

BTCS is in the crypto sector and has historically run alongside bitcoin. Bitcoin is basing around its support level…

If it runs, it might take BTCS along with it.

FCEL had a tremendous run after President Biden’s election, like other EV stocks. In a two-month span, it gained over 1,000%!

It’s since lost most of those gains. But it could be poised for another run…

FCEL is also part of the hydrogen sector. Alternative energy has been hot, and hydrogen might have untapped potential.

It went up over 500% on NFT news in a couple of days. That was the first that many traders had heard about the NFT sector.

It has a pretty lackluster chart otherwise. But if NFTs get hot again, this stock could run with them.

Was Microsoft a Penny Stock?

Sort of. With its nine stock splits taken into account, Microsoft (NASDAQ: MSFT) was in penny stock land as recently as 1995.

Can You Tell if a Penny Stock Will One Day Be Worth Millions?

Nope. No ‘expert’ can predict the next Amazon. If they say they can, don’t believe them. It’s a scam.

Do your research. Study companies, patterns, and everything else about the market.

What Percentage of Penny Stocks Succeed?

How to Spot Penny Stocks Before They Explode

We don’t try to predict the market, we react to it.

That means keeping on top of the market. You should know its history and current mood. This is important for putting together your watchlists — which are the bedrock of all we do here.

When it comes time to trade, you need a best-in-class stock screener. The one I use is StocksToTrade.

It shows me the stocks that are moving each morning. Its built-in algo, Oracle, gives me a picture of market sentiment at a glance.

Start your 2-week trial for the best weapon here!

Any penny stock could turn into a hugely successful billion-dollar company … but most don’t.

What should you do with this knowledge?

Accept it. Learn to trade patterns, do your research before every trade, and always stick to your plan.

What did you learn from the most successful penny stocks in history? Comment below!