2
October 24, 2019
featured, Stock Trading
By tbohenstockstotrade-com From Stocks To Trade

No doubt, trading seems pretty dominated by men … but there’s a growing contingent of killer female traders out there. And there’s no reason more females shouldn’t become traders…

Anyone with an interest in the markets can find inspiration in these traders. But I hope they also help motivate other women to trade. The market isn’t a boys’ club — it’s for anyone who has the desire, the drive, the commitment, and the dedication for it.

At StocksToTrade, we have a diverse group of members. We’re always looking for our next success story…

Ready to be our next big success story? Join our elite trading community at StocksToTrade Pro and take your trading to the next level.

5 Female Traders You Should Know

When I sat down to research this post and build a list of female traders, I had the option of listing some big-name female investors and fund managers…

I have some really interesting and inspirational female traders for you. Here they are…

There are at least 10 books that every trader should read no matter their skill level or trading style. One is called “The New Market Wizards” by Jack D. Schwager.

Published in 1992, this book was the second in Schwager’s “Market Wizards” series where he interviews high-performing traders. One of the traders featured in the book is Linda Bradford Raschke (LBR).

I suspect many readers of this blog have heard of Linda. She’s a prominent trader and figure in the trading and trader education community. You could arguably put her on the Mount Rushmore for traders.

Linda began her trading career on the floor of the Pacific Coast Stock Exchange in 1981. She’s gone on to have a stellar career as an independent trader and CTA money manager. At one point, she ran one of the best performing CTA funds in the world.

Today, almost 40 years after her start in the markets, Linda’s surely seen nearly everything … Huge wins and epic losses, market crashes and monster bull markets, and even adapting from floor trading to electronic trading.

Linda’s still going strong. She’s active in the market most days. And she gives back to the trading community through education, webinars, and speeches. If you ever have the chance to see Linda at a trading seminar, I highly recommend you go and watch her speak.

Born and raised in Germany, Mandi eventually found her way to Hong Kong and then to Melbourne, Australia.

Due to Australia’s visa constraints, Mandi couldn’t work for her first year … she had to do something with her time. She attended a wealth creation seminar, which eventually led her to trading. She knew the markets were her calling.

Mandi’s been active in the markets ever since. She still resides in Melbourne and trades the German DAX and FX in the evenings. She’s also made a name for herself as a professional mindset coach. She’s even presented alongside Linda Bradford Raschke.

Mandi has plenty of techniques to help traders manage their emotions, find their strengths and weaknesses, and set trading goals. Mandi shared something in a webinar that I completely agree with … It was along the lines of ‘the fastest way to succeed in trading is to model those who have already succeeded.’

That’s absolutely spot on. I think that learning from experienced traders — their techniques, mindset, and behavior — is a great way to becoming a smarter, more consistent trader. These days, traders sit in front of computers and click buttons to execute trades. But it wasn’t always like this. Trading used to be done in pits on the exchange floor.

Hordes of sweaty traders and clerks would stand in the pits, screaming and shouting out orders as the markets fluctuated. There’d be plenty of swearing and battling for orders. Sometimes traders would even resort to throwing punches.

The trading pits were often male-dominated — full of testosterone and plenty of big egos.

So, you might be surprised if I told you one of the most dominant floor traders on the Chicago Mercantile Exchange, the world’s largest futures exchange, was a woman…

That trader was Margie Teller.

After graduating from college in 1984 with an OK GPA, Margie applied for countless Wall Street firms. She was constantly rejected until she snagged an interview at a Chicago-based options trading firm. She got the job and traded for the firm for a few years until she built up enough capital to trade for herself.

Margie spent most of her career in the eurodollar futures pit. That’s where she grew her trading size to rival the positions of big banks and earned the nickname ‘Large Marge.’

As a pit trader, Margie had to overcome a few obstacles, like having a high-pitched voice. So Margie worked with a voice coach to learn to direct her voice and belt out her orders using her diaphragm, the same way that opera singers do.

For decades, Margie dominated the eurodollar futures pit and eventually retired in 2010.

Currently, Margie dedicates herself to creative pursuits and charity work. She chairs the diabetes charity Friends for the Cure, which raises money for diabetes research.

As a teenager, Nicola Duke was introduced to the stock market after her mother gave her some money to invest. No, she didn’t go on to become a teenage trading phenom. Instead, she followed her interest in aviation.

After school, Nicola joined the British air force and become an air traffic controller (ATC). After years of service, Nicola moved over to the civilian ATC sector — and she made her second connection to the markets…

She heard about a bank in London looking to attract ATCs to become traders. The thought was that ATC skills would cross over into the trading world … Both ATCs and traders have to make decisions under high pressure, stick to their plans, and remain calm and cool in dangerous and volatile situations.

The bank was probably on to something…

Nicola knew she wanted to be a trader, but it wasn’t time just yet. She moved to Toronto, Canada to build a private jet charter company. And that’s when she met veteran trader Victor Sperandeo. He gave her a copy of a trading book he’d written: “Trader Vic: Methods of a Wall Street Master.”

That lit a fire under Nicola — it was finally time to get into the markets.

While she couldn’t trade during the day, she woke up early each morning to the London session starting at 2 a.m. Talk about determination!

Step by step, she developed trading skills, found a mentor, and eventually moved back to the UK to swing trade the markets full time.

One interviewer asked Nicola to give advice for newbie traders. She shared how valuable it can be to join a trading community. Finding like-minded traders to learn from and with can make the trading journey so much easier and enjoyable.

I couldn’t agree more with Nicola. That’s the main idea behind our StocksToTrade Pro community. It’s where traders can huddle, get daily advice and analysis from me and each other, learn cutting-edge techniques, and interact in our friendly chat room.

Step up your trading game today — join us at StocksToTrade Pro. For number five on the list, I want to talk about someone I’ve worked with personally. That’s none other than Jane Gallina, popularly known as Airplane Jane.

Like Nicola Duke, Jane had a love of aviation growing up. She got her pilot’s license in 1996.

In 2004, Jane went to work for the airlines, met her husband, and ended up moving to Montreal, Canada.

While in Montreal, Jane worked a part-time job she absolutely hated. The hours sucked, the pay was crap, and she just wasn’t happy. To make things worse, she got laid off from that crappy job … while 8 months pregnant with her daughter.

She needed an income, so she thought real estate sales. That didn’t work out. In Montreal, they speak both French and English. Her French wasn’t good enough to pass the real estate exams…

That’s when she got the idea to get into the markets. Jane had previously invested in stocks, but now she was interested in becoming a trader.

That’s when she discovered Tim Sykes and started studying his educational materials. She opened a trading account with $6,000 but blew through it all due to poor risk management while trading low float stocks.

Once her daughter started daycare, she returned to the markets, diving in and really focusing on studying and learning.

Jane studied the markets every day. She saved charts and tracked various stocks. She listed all the stocks that gapped up or down and did all the homework that Sykes and I tell traders to do…

That hard work paid off … Jane eventually made over $150,000 in a year trading penny stocks as a stay-at-home mom. What a fantastic story!

[Please note that Jane’s results are not typical. She has exceptional knowledge and skills that she’s developed with time and dedication. Most traders lose money. Trading is risky. Do your due diligence and never risk more than you can afford.]

No matter your background, if you want to actively trade stocks, you’ll need a way to access stock quotes, charts, scanners, news stories and search for the best opportunities.

That’s what StocksToTrade does, it’s a best-in-breed trading and analysis platform created BY traders FOR traders.

Right now, we’re offering traders the opportunity to try our platform for 14-days for just $7. I hope I’ve broken the notion that the trading world is a boy’s club. There are plenty of women who succeed in the markets.

No matter your gender, there’s a ton of inspiration you can find in each and every one of the traders I listed above.

To be honest, I think trading is a meritocracy. Your career and longevity rely on your ability to analyze, take, and manage trades the smart way. Your gender or background doesn’t matter. Your ability to think on your feet and adapt the markets — that’s what matters.

And that’s what we strive for in the StockToTrade Pro community. We have traders from all walks of life. Looking for a community to help you improve your trading? Join StocksToTrade Pro today…

I love that trading is open to anyone who’s willing to put in the work and time. Tell me how you got into trading! Leave a comment below…

Scammers Are Targeting Traders. Learn How to Stay...

Scam alert! Lately, I’ve had a bunch of scammers and fake accounts posing as me on social media ... I tell ya, these... How do stocks work? With all the recent hype in trading, it’s a good question to ask.  But here’s what the pros... 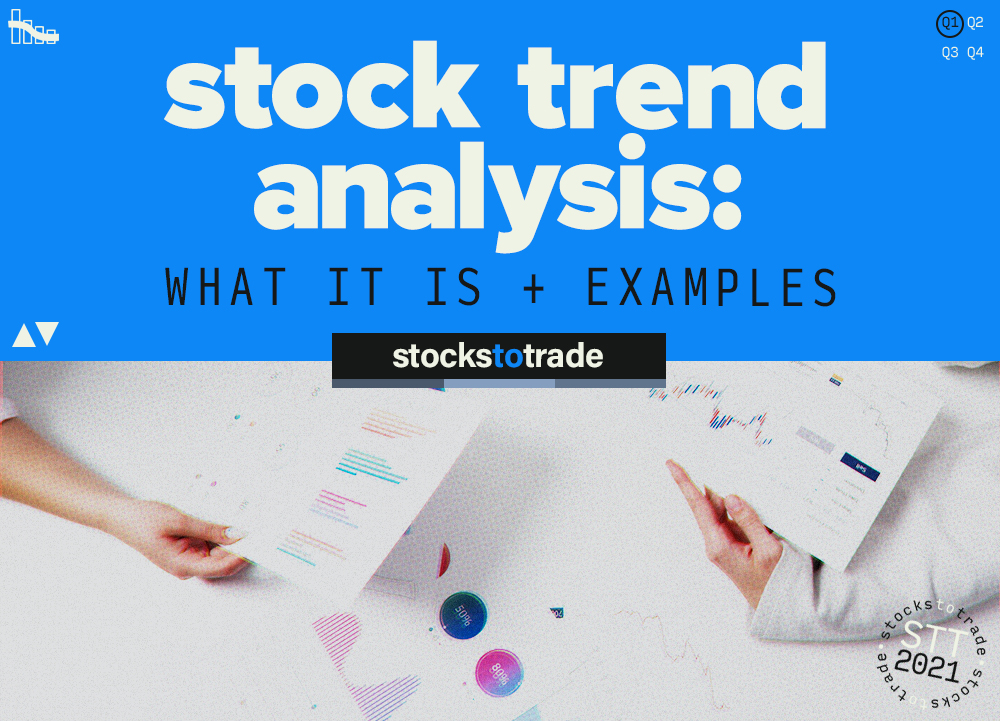 Stock Trend Analysis: What It Is + Examples

Veteran traders use stock trend analysis to spot market trends ... Then they swoop in with a plan to trade the meat of...