Professional traders do not spend their entire day sifting through accounting reports, in an effort to understand the business model of every firm that their money touches. Indeed, that whole process would take up an inordinate amount of time and produce disproportionately low results.

Instead, traders use technical indicators to get information on price trends for securities that they have their eyes on or have already dipped their toes into. These devices do not use any business fundamentals, such as earnings or costs, to predict market behavior. Instead, they measure and analyze short-term price changes, in order to determine the best entry and exit point for securities sitting in the portfolio of investors who play the short game.

Long-term investors: these probably will not be the most helpful tools for you.

Nowadays, computer programs take most of the work out of the calculations involved in setting up computer models that are based on technical indicators. Still, if you’re interested in how the sausage gets made, check out Investopedia – a leading financial education website.

Welles Wilder put together the relative strength index (RSI), to compare the size of recent gains and losses over a time period of the broker’s choosing. A stock’s index value, which could stand anywhere from 0 to 100, evaluates which direction a price trend is moving and how fast.

An RSI value of above 70 generally indicates that a stock is becoming overbought and potentially overvalued. On the other hand, most readings under 30 show that the security is over-sold.

Large price movements have tricked RSI-dependent traders into buying or selling stocks earlier than the financially optimal time.  So, some investors have begun using the 80 and 20 marks, to determine a stock’s overbought or oversold status.

The RSI can be fine tuned for other uses, too. The Money Flow Index, also known as the volume-weighted RSI, tracks the direction of a price trend as well, but adds trading volume to the equation. The addition helps to determine if other investors have initiated mass buys or sales of the security of interest.

Trader George Lane developed the stochastic oscillator, in the late 1950s, as a way to determine the momentum of a security over a specified period of time, typically a 14 trading day period.

The theory underpinning the oscillator states that if a security is heading upwards in value, its price will close at a level near the highest price it has held over the time period entered into the equation. If it is about to take a nosedive, the price will close near its period low.

Lane contended that the oscillator’s significance stems from the fact that it measures a security’s price momentum, because, as a rule, the speed of a stock’s price shifts before the price adjusts to the new market constraints. For this reason, this device can predict upcoming bullish or bearish tendencies.

Oversold or overbought securities show themselves through the oscillator, due to its range-based evaluation system, which assigns each security a rating between 0 and 100, based on the stock price’s distance from period highs and lows. Generally, the range will fall to 20 or below, if the stock is oversold and rise to 80 or above, if it is overbought.

Moving averages (MA) are tricky: traders who use them effectively will find them insightful.  But, those who fumble could cause themselves big losses.

By their nature, MAs are lagging indicators, meaning that they should be used only to confirm moves suggested by other models or strategies. More often than not, if you see a significant move in a stock’s value, using a model based on MAs, the most profitable time to take action has already passed. Instead, use a moving average-based model to measure the strength of an upcoming trading opportunity.

For the sake of this example, we will calculate the figure based on a 10-day trading period. Gather the past twenty days of closing prices for the asset. Then, add up the oldest ten and divide by ten. This will give you the price average for the first ten days of the time period you are analyzing.

To find the next point on the plot, move forward one day in time and average the new range of prices. Rinse and repeat until you reach the last closing price that you have. Eventually, you’ll have a set of ten averages that you can graph to track emerging growth or diminishing returns.

If prices fall below the MA line, it might be time to sell. Conversely, a climbing price trend surpassing the MA line could signal a new buying opportunity.

The second major form of crossover occurs when a short-term (15-day) MA crosses over a long-term MA (50-day). If the 15-day average rises in value more drastically than the 50-day one, an asset is thought to be in accelerated growth.

The opposite is also true: a steep decline on the 15-day average, past the 50-day line, indicates a quick depreciation rate and a potential buying opportunity.

Famed investor John Bollinger first pitched his namesake technical indicator during an appearance on the Financial News Network in the 1980s, before the TV station merged with CNBC. Bollinger is a long-time veteran of the trading world and currently runs a YouTube channel filled with hour-long seminars on the nitty-gritty of Bollinger Bands.

The bands allow traders to pick out extremely high or low short-term prices in a security, by graphing the moving average of a predetermined set of prices. Next, investors plot two trading bands that are one standard deviation above and below the moving average, according to Investopedia’s video definition. The two bands act as a measure of a stock’s volatility, due to their standard deviation-related calculation.

Normal conditions will keep stock prices within the constraints of the two trading bands, which will expand and contract, depending on the relative range of the moving average upon which the standard deviation is based.

When the bands expand, the stock price turns volatile. And, vice versa – when they contract, the price becomes stable.

Here’s how the bands work.  The whole concept is based on the premise that a period of stability will be followed by a period of increased volatility, during which a profitable trading opportunity could arise. When the bands constrict the moving average, the price will soon either drop or spike, making the stock of interest to sellers and buyers.

Traders also use this method to identify and take advantage of periods where a stock may be priced unjustifiably high or low, as a result of overbuying or overselling, respectively. You’ve probably seen day trading setups stocked with the best trading monitors money can buy… Some have so many... 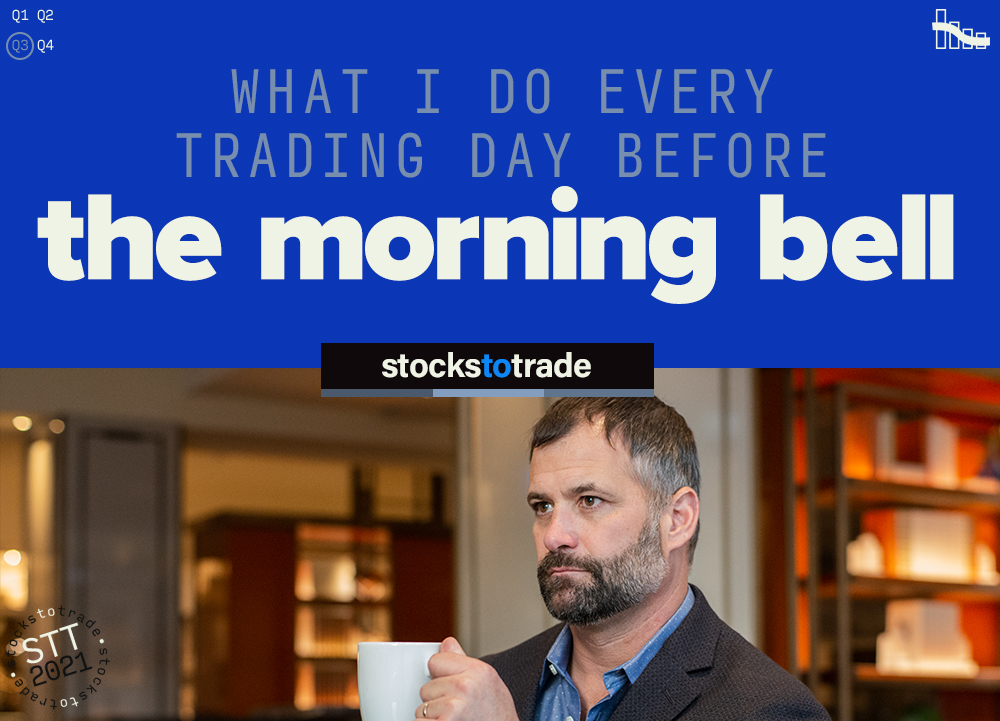 What I Do Every Trading Day Before the Morning...

Bohen’s Morning Routine: Key Takeaways What Tim Bohen does every day — no matter what... How this routine...