AHPI stock rose as much as 70% in today’s session and at writing, shares were still up more than 50%.

The rally doesn’t appear to be linked to any specific news from the company but rather a COVID play after the CDC revised its mask guidance for vaccinated Americans this week due to ramped-up concern about the spread of the Delta variant.

The STT Breaking News Chat took note of this mask play early today, sending out their first alert on the stock at 9:45 a.m. Eastern. 10 minutes later they pegged Allied Healthcare as the leader in that run.

Why Would AHPI Stock Pop on Mask News?

Its product line includes mass casualty ventilation products, which the company says were “designed from inception to meet the unique ventilation demands that can occur during a mass casualty event or pandemic.”

So it makes sense the stock is jumping as officials warn about a possible resurgence of the pandemic.

As Contagious As Chickenpox An internal document from the CDC is being circulated which shows the health agency believes the Delta variant of COVID-19 is far more dangerous than previous strains.

That presentation urges officials across the country to “acknowledge the war has changed” against Delta.

One particular slide sounds the alarm on how contagious Delta is, saying the variant is just as contagious as chickenpox.

That same slide says the variant is more contagious than MERS, SARS, Ebola, the common cold, seasonal flu, the 1918 flu, and smallpox.

The document also discusses how easily vaccinated patients can spread Delta, saying the breakthrough cases may be just as transmissible as cases in unvaccinated Americans.

The CDC data also cites studies that show the Pfizer-BioNTech vaccine is not as effective in preventing this strain.

But the results of those studies vary.

But results from Israel show infection may be more likely.

This data is what appears to have prompted the CDC to revise its mask guidelines this week, encouraging fully vaccinated Americans in areas with “high transmission” of the Delta variant to begin masking again indoors.

Learning From the U.K. 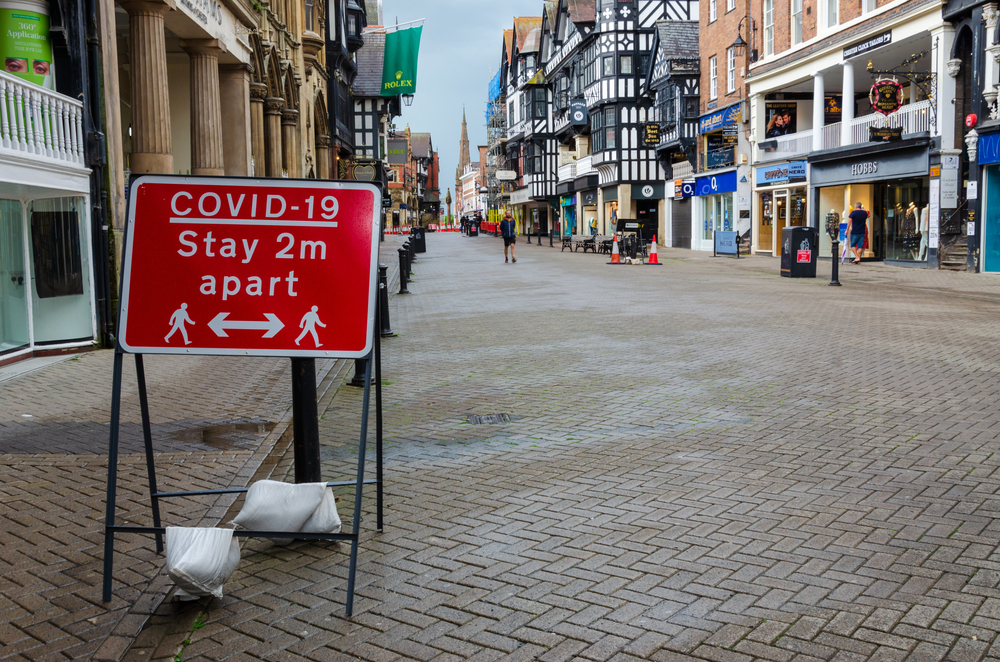 As U.S. officials work to predict what might happen with Delta here, looking at how the variant spread in the U.K. might be helpful.

In an interview with CNBC earlier this week, former FDA Commissioner Scott Gottlieb highlighted how quickly Delta peaked across the pond.

“I think the more observable trend is what’s going on in the United Kingdom, where cases are clearly coming down at this point. There’s a very clear trend down. It seems like they’ve peaked,” said Gottlieb.

He predicted the U.S. could see a much faster peak than expected just like the U.K. did.

“If the U.K. is turning the corner, it’s a pretty good indication that maybe we’re further into this than we think and maybe we’re two or three weeks away from starting to see our own plateau here in the United States.”

In mid-July, a leading scientist in the U.K. told the BBC he was “almost certain” COVID cases would reach 100,000 and 1,000 hospital admissions per day.

But that never happened.

That’s a 50% reduction in cases in just one week.

The U.K. and the U.S. have comparable rates of those previously infected with COVID who now have antibodies and those who have been vaccinated.

56% of those in the U.K. have received both shots while 49% of adults are fully vaccinated in the U.S.

The data suggests the U.S. is about one month behind the U.K. on Delta.

That’s identical to where the U.K. was on June 25.

If the U.S. continues to follow the same curve, cases could nearly quadruple before rapidly plummeting.

But Gottlieb said a lack of widespread testing in the U.S. may be under-representing how far we actually are into Delta.

He told CBS, “There’s probably a lot of people with mild to subclinical infection since more of the infection is happening in a younger population that’s less likely to become very symptomatic.”

“We’re not doing a lot of testing [and] more of the testing that we are doing is antigen tests that are being done at home and not getting reported. So, I think we’re much further into this epidemic than we’re picking up — and hopefully further through this epidemic.”

As the Delta variant surges, it’s unclear what impact the CDC’s actions this week may have on vaccination rates.

The Risk of Undermining the Vaccine

Although government officials are hoping Americans will get more concerned about Delta and thus get their vaccine, critics say the reversal of restrictions could have the opposite effect.

Many of those who have been hesitant to the vaccine say they have no incentive to do so because they won’t be free to do what they want.

There’s also a large swath of the population with a “what’s the point” mindset if the vaccines don’t prevent Delta.

In a statement, Representative Cathy McMorris-Rodgers said the move undermines the vaccination efforts.

“All these actions only create a dangerous level of resentment toward a government that is acting like an authoritarian regime seizing more command and control in our lives and healthcare decisions.”

She ended her statement by saying, “The American people should be trusted to make this decision for themselves and their families.”